What do they know

The Cap enjoys the seaside very much, as you can imagine. This pic immediately below was taken at the Aberdeen shoreline, where I visited on 13-14th June 2011. It held a certain strange fascination for me. 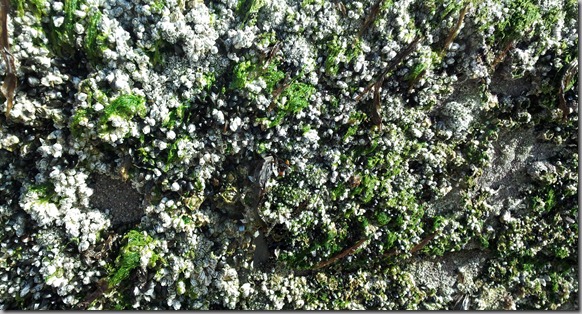 I looked down on these barnacles, waiting for the water to wash up on them.

They would live, reproduce and die, oblivious to the world around them, or the complexity of the heavens above, or that someone was looking down on them.

Their lives are so simple compared to mine. “Would I trade places with them if given the chance?” I wondered.

My thoughts were interrupted by a splash of water against my feet. I retreated. I walked and looked around. What a view.

And I thought of my life in the same way I looked upon the lowly barnacle. And then I thought, “There is so much up there that I don’t know about, so much I will never know about.”

I was motivated to publish this by Leonard Susskind, a renowned physicist who probes the deeper nature of reality.  He’s been called the bad boy of physics. In essence he was recently said that reality may forever be beyond the reach of our understanding. See Scientific American 2011-06-22. In a sense there’s nothing new in that. But somehow that sobering thought resonated with my experience of the barnacles. They too were limited in  ‘understanding’ the reality around them.