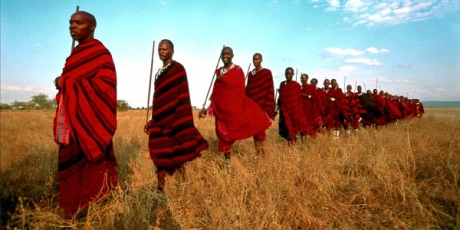 I’m really becoming very worried about the state of the world. Look at this: Stand with the Maasai, where thousands of Maasai are about to be evicted from their land to allow wealthy game hunters to roam. No – I’m not one who usually jumps on to bandwagons and campaigns. But today a number of issues hit me and bothered my soul.

Kicking out people from their original homeland is nothing new. It’s happened to the Aborigines and to the Chagossians. I’m sure there is a long list of peoples who have been treated similarly.

Why should I care? Last week a very educated person was apologetic and said to me that they couldn’t be concerned about these sort of things simply because they could exert no influence or control over such matters. Their modus operandi was not to watch the news. This connected with another person I met about three months ago who was proud to say they did not watch the news or keep abreast of current events. Well, I think that’s despicable and shameless. I mean if everybody adopted that sort of attitude of ‘head down.. I couldn’t be arsed’, what the hell sort of world would that leave? Perhaps it’s the exact ‘new world’ that I’m experiencing now!

Switch frames slightly. Watch and listen carefully to this video.

No – it’s nothing to do with a people being kicked out of anywhere. In fact Assange would be happy to be kicked out to Ecuador. But no such luck for him. This video is about one man battling a ‘shameless world order’.

Yes – I am aware that Bradley Manning has pleaded guilty to 10 charges. Does that surprise me? And is that a big issue? Who’s pleading anything about helicopter pilots shooting down people and having a fun time about it – as if they’re in a video game?

It appears to me that once a ‘power’ can dominate and define it’s own law, then there is a serious risk of abuse. What room is left for any sense of morality? I don’t see it.

That is the thread I see running through all this. Some days I’m ashamed to be considered part of the human race. Of late I’m more at peace when people insult me and assert that I’m from ‘Zog’ or some other planet. You see in my world this sort of utter contempt for the human condition, could not happen.